By, I think, I mean “I think this is the 58th post on Working Tools”, not “I am a sentient being.” The jury is still out on that one.

I’m doing a lot of work around productivity. Not paid work, but work nevertheless. In actual fact, I’m paying to do some of it.*

The more I read, hear and consume, the more I realise that there is a tendency to focus on the what, and the how.

This question was prompted by my participation in the Focus Course Academy by Blanc Media. The course demanded that I examine my identity, my goals and ambitions. I was furious. I was here to talk about productivity, getting things done, making stuff happen - not some hippy crap about “my vision.” Huffing and puffing I started the exercises, intending to get them out of the way, so that I could get to the part where we would finally settle the great task manager app debate or how to get the best from e-mail.

I found this exercise a crushing epiphany. An epiphany because it quickly became apparent that the why is THE important question, actually, the only question. Crushing, because I’ve been noodling about in this area for 6 years or more, and it’s never occurred to me to think about the why.

I daresay I’ll write more about the Focus Course Academy at some point - but I urge you to go look for yourself. I’m not on a commission, I’m recommending it because I found value in it. Perhaps the most telling endorsement I can give is that I paid up for an additional course.

There might be lots of reasons. You might need to be productive to make money, or to not get fired. There may be some vague notion of being the best person that you can be.

Rightly or wrongly, we’re conditioned to be outcomes oriented. Everyone interested in this topic knows the satisfaction of completing a list, or a project; of achieving a goal. Secretly, everyone of you has added an already-completed task to a list, just so that you can tick it off. There's nothing at all wrong with that - it’s perfectly explainable through chemistry actually, but what it’s not, is productive.

All this stuff isn't about cranking widgets at all. It’s about happiness isn't it?

I have two dogs.

Spice, a laid-back Cypriot princess. Served by two adoring humans, she has a joyous life, and she knows it. Spice was dumped in a cardboard box with her brother and sisters, barely weened.

Charlie. A wrecking ball of nervous energy. A pedigree Jack Russell, in a perpetual hurry. Charlie was Rupert, and lived with a young family. Left alone, his nervous energy resulted in destruction and mayhem.

Every day, I attach leads to their collars and take them out into the countryside. Charlie strains at the leash, determined to get us to our destination as quickly as possible. We follow one of several loops, always ending up exactly where we started; back at home.

On the other leash, Spice meanders. Reading every p-mail, certain to sniff out each nuance in the scent. From time to time, she stops, seemingly lost in a reverie, listening to a song that only she can hear.

Apart from a good workout, the walks give me insight.

Charlie strains furiously all the way round the walk, arrives home and collapses asleep. Exhausted from the effort. Spice saunters along the path, and once we’re back, retires to her chair on the balcony and snoozes, content.

Spice would jot a few notes with a pencil. Charlie would have an Omnifocus setup with 12,000 open tasks in it.

My writing is supported by people like you. The Working Tools series is free to all, but there are other series, limited to members only. Membership costs £3 a month or £24 per year. For this princely sum, you will get access to subscriber only posts, a members chatroom, a private podcast, and a digital copy of any and all work that I publish in the year. If you can, then please become a member. Thanks for coming by.

13. The Fleshpots of Burgos. 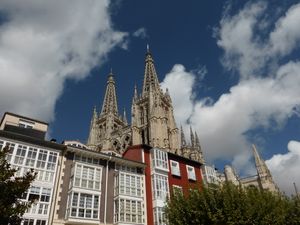