You can't write a blog, know that word, and not want to, one day, entitle a post with it.

"The belief that there should not be an official relationship between a country's government and its national Church".

On Friday, the government of Cyprus announced a tightening of Covid restrictions. For the last few weeks, we had been moving toward relaxation. There was an acceptance that the island desperately needed to get the tourist season started. Losing a second summer was unthinkable. The weather was warming up, the vaccination program accelerating, and there was a heady whiff of optimism in the air. Cyprus was leading the world; rapid testing 50 or 60 thousand people every day. A massive amount for an island this small. The testing revealed a stubbornness in the virus. Daily infection numbers wouldn't drop below 300. Then, they increased to 500. Within days, new records had been set, with 1,000 new infections in a day a very real possibility. Covid wards were full. Stories began to emerge of people being treated as they sat on chairs. The government had no choice but to act.

Bars and restaurants, recently permitted to serve outside, were restricted to takeaway only. Non-essential retail was closed. Hairdressers, beauticians too. Where residents had been allowed to leave home twice a day (having sent a SMS to the government), we are now permitted just one excursion, for a maximum of three hours. To protect the medical system, two weeks of strong action was required.

Nobody liked it. However, we're a doughty lot and so knuckled down.

Then came this headline. The Church was above it all.

Essentially, the church was not going to conform with the new regulations. It's Orthodox Easter and the church will proceed as it has done for hundreds of years. The Orthodox Church is entwined with the culture of the hellenic world, of which the majority of Cyprus' population considers itself a part. Tellingly, it is the largest individual land owner on the island and wields not insignificant influence.

The government hiked up its pants, rolled up its sleeves and set its jaw. This was going to be some fight!

Then, it immediately amended the restrictions, liberally sprinkling "unless you're going to church" across the text. Those brave warrior politicians.

Now - call me a cold-hearted, logic-obsessed geek, but a short, sharp lockdown is going to be somewhat undermined by a series of super-spreading events across the island, is it not? I should point out that Orthodox services go on for hours - particularly at Easter.

Naturally, the Police have absolutely no chance of enforcing any travel restrictions now. What's to stop me saying? "Off to church, officer. Out of my way."

In sum then, the government have delivered another hammer blow to business on the island, promoted super-spreading, and shown themselves entirely powerless against the church - all within twenty-four hours. Bravo!

These same scions are off to Geneva to negotiate with Turkey, to bring an end to the occupation by force of half the island. What will they manage? Perhaps we'll all be Turkish by summer.

My writing is supported by people like you. Living the Dream is free to all, but there are other series, limited to members only. Membership costs £24 per year, or £3 per month. For this princely sum, you will get access to subscriber only posts and podcast, direct access to a members chatroom, and a digital copy of any and all work that I publish in the year. Become a member.

The link has been Copied to clipboard! 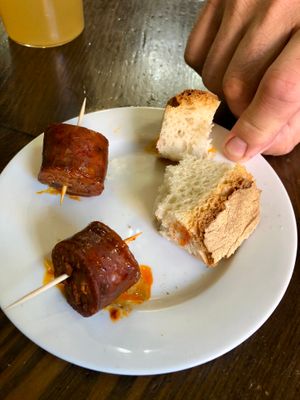