Living the Dream 102. Done not Perfect

Mrs L and I are fundamentally different in some ways. I'm a fan of "Done"; she's seriously into "Perfect". I'm big picture, she's all about the details.

You have to be up early in the morning to catch me out. No way was I going to make that decision on my own. After consultation with Mrs L, I reverted.

We were having steps built into the shallow end of our pool. (Could I sound any more privileged?) I'm happy to dive in (well, more of a barely-controlled fall than a dive), but Mrs L has had major back surgery, so required a more genteel access from sunbed to water. Ahmed had done the same job for a friend, who was delighted with the outcome.

Days later, I remarked that the concrete was cracked.

Later again, Rosta, the Lithuanian pool-welder, was growling. The old liner, when welded, was discolouring. It didn't look great. Together, we examined the curves. Ahmed had built them by eye, or with his eyes closed. One of the two. This necessitated Rosta cutting bespoke pieces of liner. The pool was beginning to look like a poorly-designed jigsaw.

"He should have used mosaic."

"With mosaic design - the eyes see nothing. But blue?"

He murmured something distinctly Lithuanian.

Neither Ahmed nor Rosta could bear to watch the pool be refilled. They got the hell out of Dodge. I watched as a taciturn Cypriot pumped 60 tonnes of water into the pool as the sun set on Friday. I drank wine and prayed.

On Saturday, there was still water in the pool. In fact, no seals appeared to have leaked. I suspect Rosta might have been surprised.

Ahmed left it until Monday to call. Poor chap is in a bind. He hasn't been paid yet - and I daresay he fears he may be on the wrong side of me. He'd be right too.

Saturday was date night - and with restrictions here easing, Mrs L and I made it into town, where I managed to keep the conversation away from steps and pools. Sunday, we had scheduled a pool-day, determined to enjoy the lovely life at our disposal.

We inspected the steps, sadly.

That must have taken a superhuman effort from Mrs L, and I'm grateful for it. The water was still too cool for her, but I carried on swimming while she went to check on the aubergines in the oven.

"The oven has tripped a fuse."

I was relieved. Sounded a little less than life-threatening. I went to assess the situation.

The oven is electric and has no manual controls - only electronic ones. This was the second time it had been used. Any attempt to flick the trip resulted in an impressive spark and a bang. Essentially, the oven was still on, and whenever power was restored, was instantly tripping again. The surround of the oven was noticeably hot.

I have top level skills with only one DIY tool. The credit card. I bravely called George, an electrician who has done work for us in the past. Together, we removed the oven, still hot to the touch.

Those cables are naked, bar for some electrical tape.

Seems our kitchen fitter was very much "done, not perfect".

George will come back to fix it. We're working on the theory that the wiring by "Botchit and Leggit" caused the overheat, which then tripped the switch - but we'll see.

Honestly. I think we might just eat out from now on. 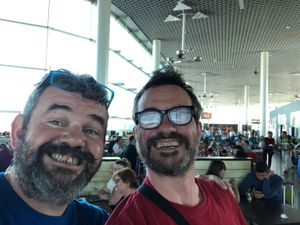 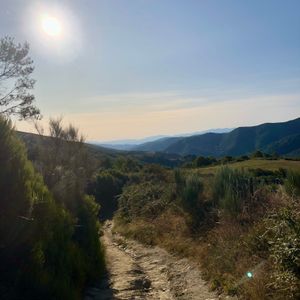